EVERYTHING MUST GO! Don't miss out our warehouse clearance sale! While stock last! 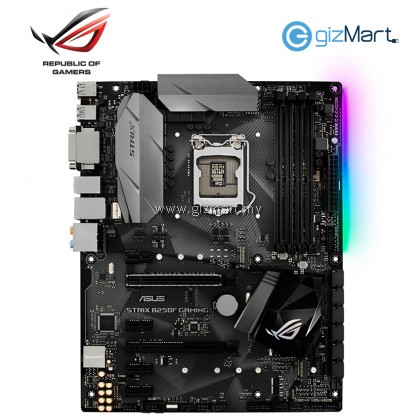 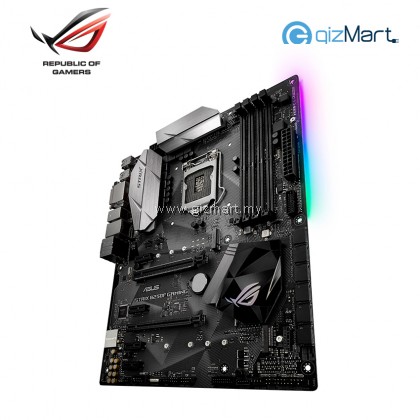 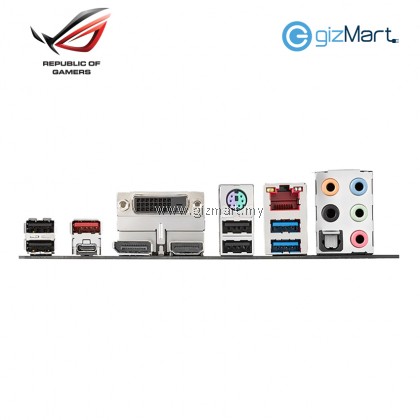 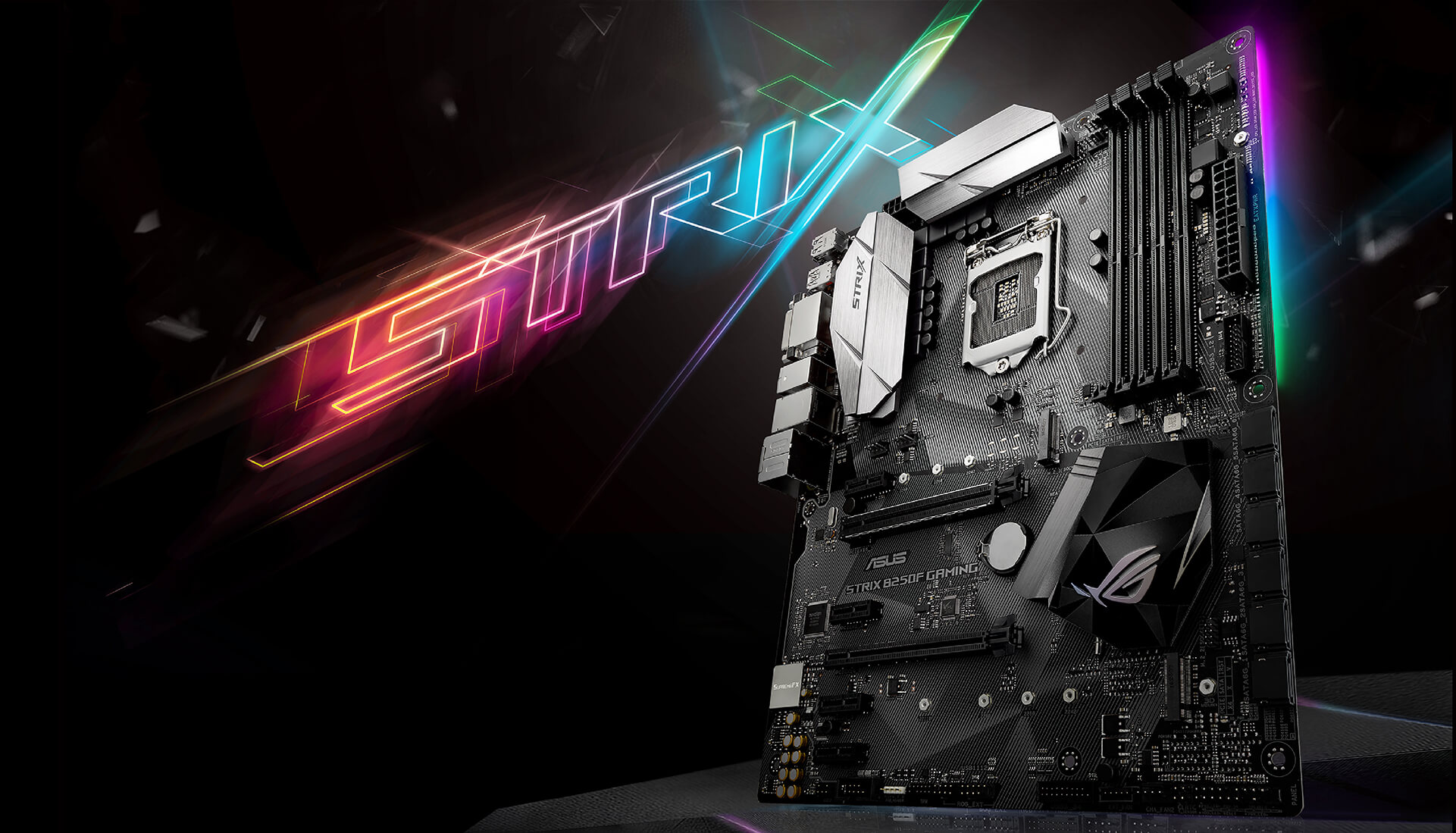 ROG Strix B250 motherboards continue the proud legacy of the Pro Gaming series with acclaimed ROG innovations. ROG Strix B250F Gaming motherboards combine bold aesthetics with premier performance and incredible audio to deliver unrivaled gaming experiences and style. Support for the latest Intel processors and technologies, plus exclusive ROG innovations, take performance to the next level to give you the edge against opponents. ROG Strix B250F charges every movement of every game with thrilling energy and equips you with epic speed and agility. Join the Republic with ROG Strix B250F Gaming and dominate your game!

Create your own custom LED lighting effects with the intuitive Aura software. Cast a stunning multi-color glow across your build with the powerful RGB LEDs built in to ROG Strix B250F Gaming, or attach a separate RGB strip using the onboard 4-pin header. Fire up Aura and enjoy the creative freedom of twelve different lighting themes. 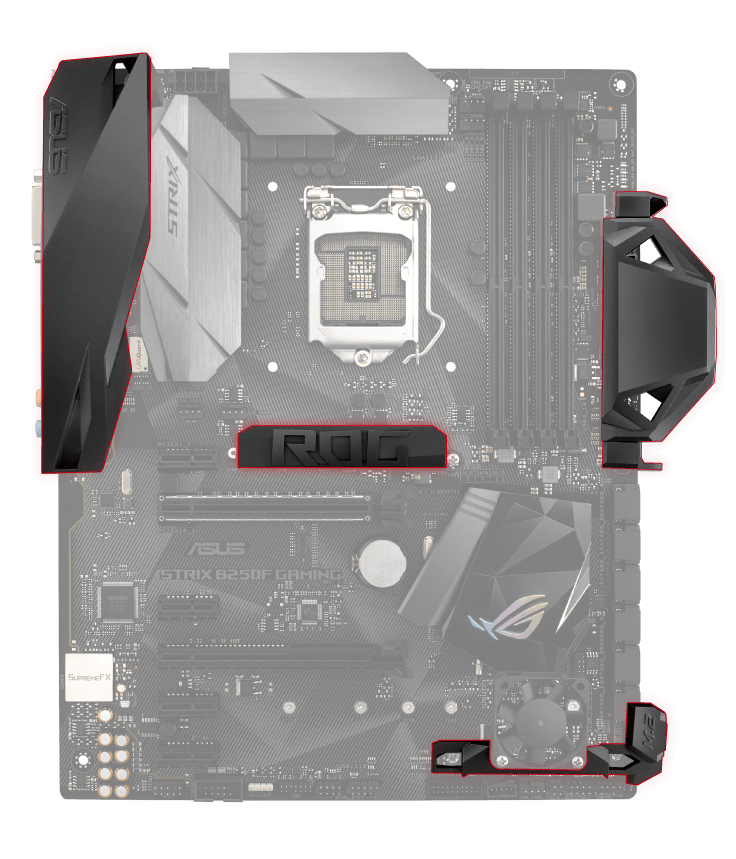 As system parts are visible in custom PC builds, make yours stand out from the competition with 3D-printed accessories.

ROG Strix's SupremeFX audio technology has levelled up, delivering an exceptional 113dB signal-to-noise ratio on the line-in connection for best-ever recording quality and 120dB on line-out for crystal-clear sound! We've also added a low-dropout regulator for cleaner power delivery to the SupremeFX S1220A codec, plus Texas Instruments® RC4580 and OPA1688 op-amps for high gain with low distortion. It all adds up to audio that envelops you as never before! 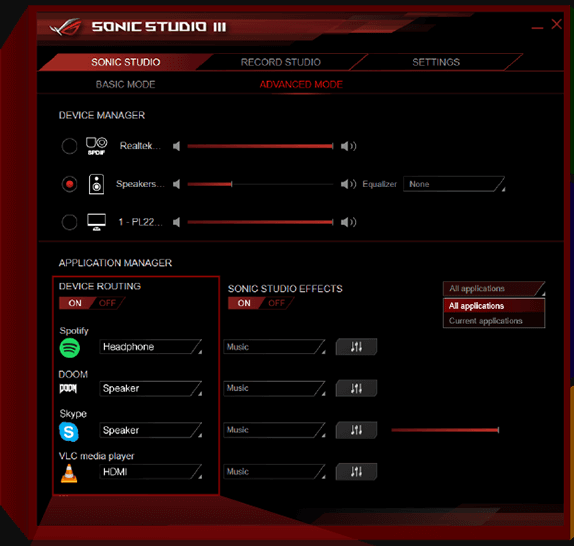 ROG Strix's Sonic Studio III audio-effects station has an intelligent routing feature made for streaming. The new routing feature ports streams to different outputs giving you full control over who hears what. With Sonic Studio III, you now can share your exciting in-game moments without worrying about frivolous DCMA takedown requests. In addition to that, Sonic Studio III also comes with app-level preferences for instant audio profiles, and improved noise filtering for conversations with total clarity! 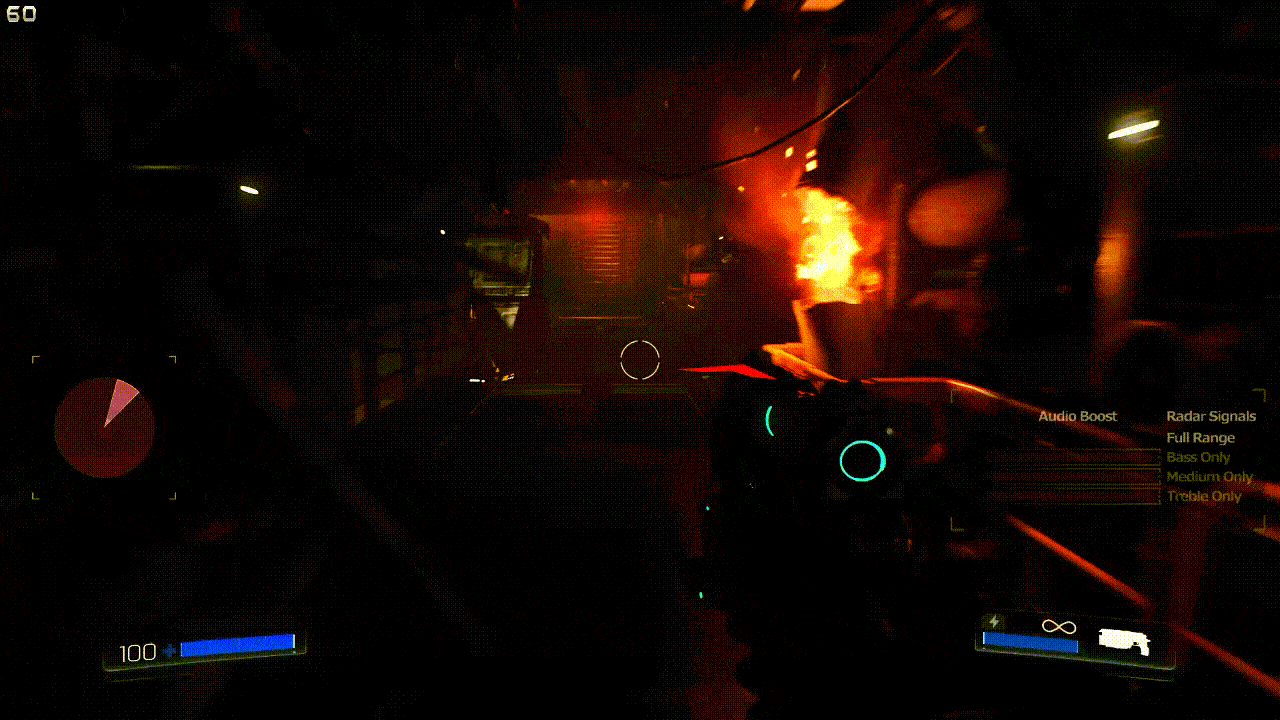 We've given Sonic Radar III an overhaul, evolving the audio engine to process sounds more accurately than ever, ensuring you're always aware of what's going on around you and we've even added an onscreen arrow to help you pinpoint the enemy's position instantly! See the origin of key in-game sounds and hone your enemy-pinpointing skills. Plus the new audio boost feature provides filters that let you hear even the faintest sounds, so you can become the hunter, not the hunted!

With the Energy Processing Unit (EPU) you'll enjoy real-time, system-wide power savings for gaming kicks that won't cost the earth! EPU automatically detects and adjusts power consumption according to your rig's needs, so you save money without compromising on thrills. EPU will also reduce CPU wattage to a set level and deliver even more savings with Away mode, creating an extreme energy-saving scenario that shuts down unused extra I/O controllers and reduces the power level of the graphics card. That means full power for your gameplay and then total energy efficiency when you step away!

Uniquely intelligent technology that effectively caches an entire storage device so that favorite games and apps launch at breakneck speeds, getting to work the moment it's activated. RAMCache II turns milliseconds into microseconds to boost game-load times and of course it's compatible with the latest NVM Express storage options! 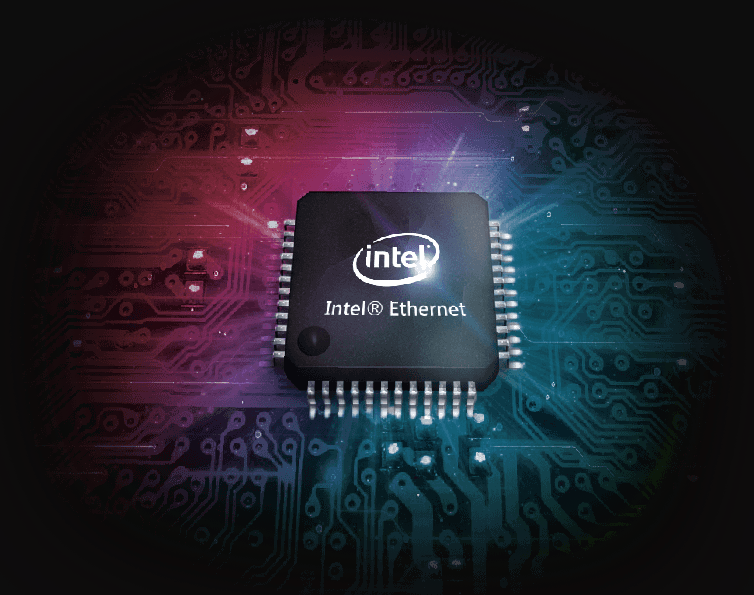 GameFirst IV optimizes network traffic for faster, lag-free online gaming and now we've added Multi-Gate Teaming to team all your networks for maximum bandwidth and the smoothest-ever gameplay. You'll also enjoy all-new Intelligent mode, which automatically compiles a database by parsing new app data to ensure that every game is optimized for the best performance. 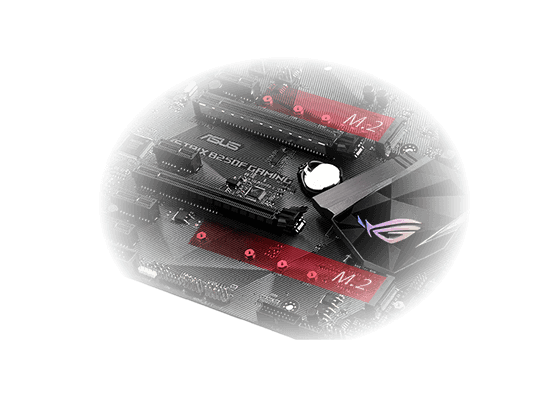 LET YOUR SSD SCREAM AT SPEEDS OF UP TO 32GBPS 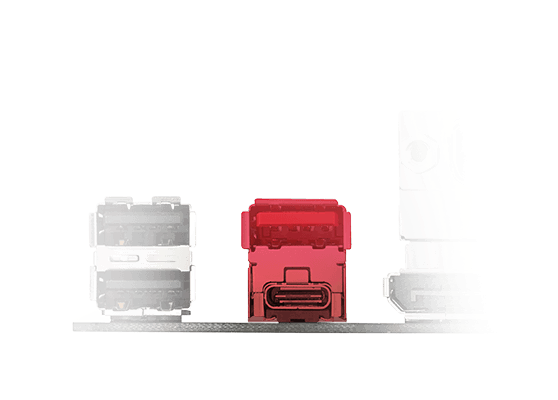 With one USB 3.1 Type-A port and one reversible USB 3.1 Type-C port, you'll experience data-transfer speeds of up to 10Gbps twice as fast USB 3.0. USB 3.1 is also completely backward-compatible with existing USB devices -- so you'll be set for breakneck USB 3.1 speeds with every connection. And as an added bonus, ASUS-exclusive USB 3.1 Boost technology automatically accelerates USB 3.1 performance even further. 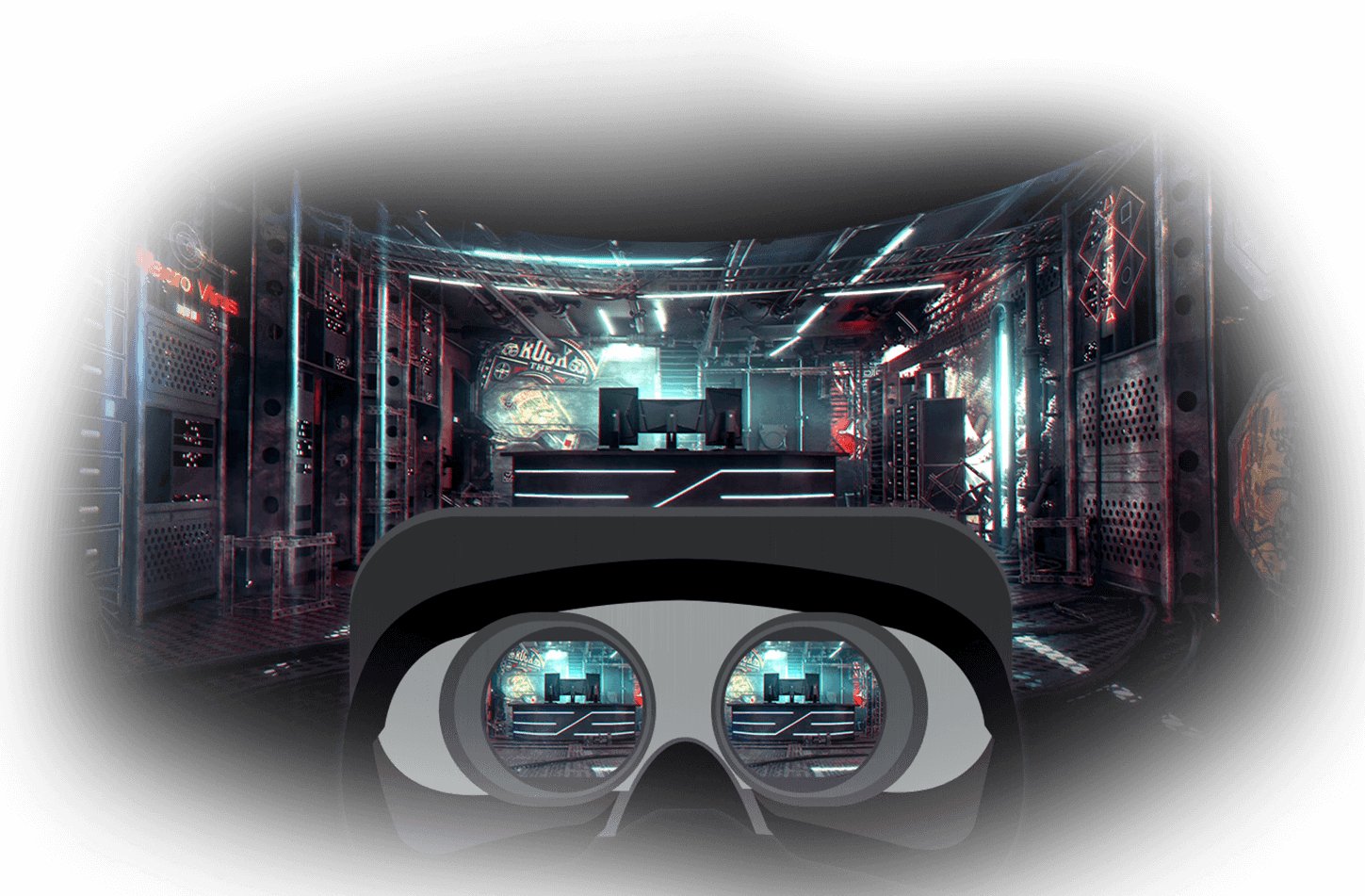 The power of Intel
Intel® B250 chipset